I left ya’ll last week with an update on Bear and her DJD. Well, she continued to improve over the weekend and into Monday, but by Tuesday and Wednesday, she was back to the way she was on the 4th of July.

Here’s one to kick start the weekend. I was sitting on the living room floor, petting Bear when Ruby came over and wanted the same attention. My wonderful hubby caught the “moment”. I love it!

Then on Monday, we had a very very bad Mr. Jeffrey James. We had Terminix go thru our house (inside/outside) for a FREE inspection. Great news! They found no termites and no bugs. Bad news! Jeffrey got upset that we put all the doggies in our bedroom while the Terminix guy did what he needed to do. 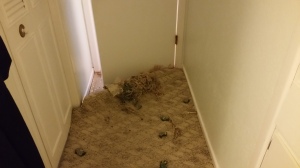 Later on that day, Bear was feeling GOOD! So good that she wanted to roll around and play in the leaves and branches. LOL. Such a silly girl! 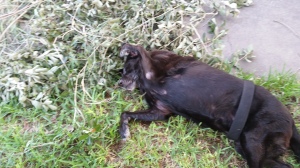 Tuesday was even better! She wanted her favorite toy! 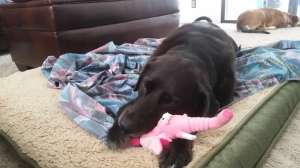 Then by Wednesday morning, we were back to the previous weekend where she couldn’t walk at all and her legs crossed at the ankles. I called the vet and they got an appt for us at 2pm. The steroid drip last week is a short acting steroid, meaning it only lasts for a few days. Knowing that it worked (her walking around by herself about 75% of the time), the vet knew that the steroid shot, which lasts longer, would work. So he did the left hip yesterday. Next wednesday we have an appt to get her right hip injected. If you do both hips, its very painful and the pain lasts 2-3 days. At least with the one shot, she is already showing improvement.

Ruby hasn’t left her side very much. 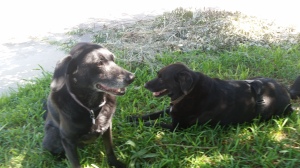 And earlier today, lol, Ruby and Bear wanted to same treatment as Bear.

Until next week, have a good weekend and “bark on”!