Good morning everyone! I hope everybody enjoyed the Easter Weekend last weekend. Ours was very low key and chill. I like those kind of holiday weekends. 😉 So let’s get started!

Mr. Jeffrey is starting to pose for me more often now again. Not sure what mood he was in the past few weeks. LOL.

How much are these doggies in the window? We were in the car, entering in an address into the nav unit and they were just watching us.

So, hubby bought a new to him truck 2 weeks ago. 2015 Ford F-150. Our 14 yr old Expediction has thrown in the towel and called it quits. Its becoming unreliable and needs $1750 worth of work on it. But, we’re not complaining as its been VERY GOOD to us. Its moved us to our new home. It moved my parents; various friends (sometimes more than once). Its tooken doggies to the beach. Its been all over the state of Texas, to California and back numerous times. Its been to Oklahoma, Alabama and Florida. So yeah…it had a great run. So, why did I bring up our new truck? Jeffrey had to inspect if, of course! 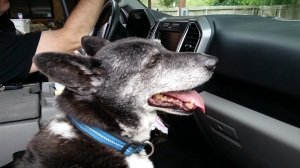 I love the truck Daddy!

Li’l Jackson exhausted from being a kitten! 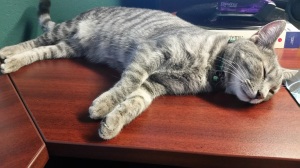 Its a ruff life, huh? 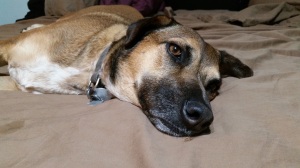 Penny wanted to give Jackson kisses! She loves her kitty! 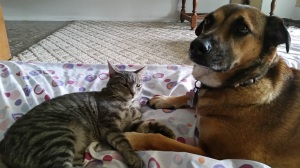 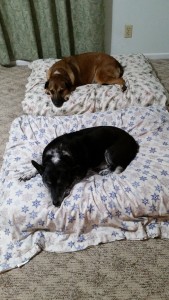 The neighbor’s dog was out with his owner (she was on the phone), so he came over to say Hi to Jeffrey! 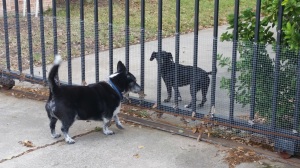 I visited with my parents for a couple of hours last Thursday and FINALLY got to take some decent pics of their doggies – who just turned two yrs old. 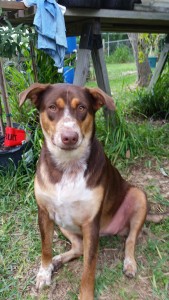 When I got back home, my pups were like, “Uh..where were you?”

Later that day, Jeffrey and Penny were actually sharing the large doggie bed. Aren’t they just cute together? 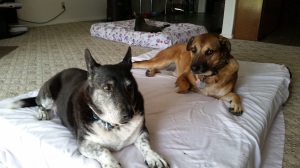 So I guess Mr. Jeffrey got tired of sharing with his sister as he took a spot on his little doggie bed:

That thing is so lumpy, poor guy. I pulled it out for Jackson, but that little turkey chooses to sleep on the bigger dog beds. But don’t worry, Jeffrey got a new bed for Easter and I’ll post those pics next week!

Unti then, bark and meow on! 🙂