Good morning everyone!! Who’s curious to see what my furbaby gang has been up to this week?!!?

Jackson found a branch with leaves and Shelby wanted to play too! 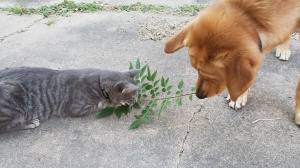 Penny is starting to come out of her shell and wants to be around the girls more, INCLUDING chewing on toys together! 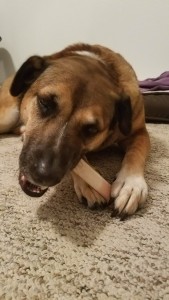 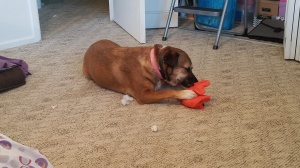 While Penny chewed on toys, the babies looked on

Jeffrey has been put on some new arthritic medication and check this out! He’s on the couch! He hasn’t done that in MONTHS! 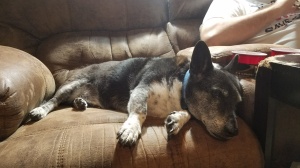 Speaking of Shelby, this past weekend she wanted to help momma unload the dishwasher!

Jeffrey was having such a GREAT weekend, he stopped for some selfies on Sunday!

While Jeffrey smiled for the camera, the babies were playing with toys. LOTS Of TOYS!

The girls stopped a little to take pics too, just not selfies!

After all that playtime and baby sitting, Penny threw in the towel and barely made it to the dog bed!

Until next time, bark and meow on!